United States Navy 1968-1989. Proud member of the Navy's Elite Submarine Force providing a strategic deterrent to cold war aggression. I served on the USS Jallao (SS368), USS Kamehameha (SSBN 642 Blue and Gold), USS Andrew Jackson (SSBN 619 Blue), and USS George C. Marshall (SSBN 654 Blue). I entered the Navy as a Torpedoman, and Retired as a Senior Chief (E8) Fire Control (Missile) Technician.
After retiring from the Navy, I worked for General Dynamics/Electric Boat in Groton, CT for 10 yearsas a network analysis Engineer and Interactive Trident Training Course ware Developer, then went to work as a Computer Systems trainer at Pfizer, Inc. I finally finished my working career as a Database administrator at Pratt and Whitney in Middletown CT.  Additionally, from 1998-2008, I served as an assistant Pastor in several local churches here in South East Connecticut.
I'm now fully retired and living in Ledyard, CT with my wife Terry and enjoying life to the fullest. If you want to contact me, email me at jerryplotts AT yahoo DOT com.

MY Flight Deck for Flight Simulation 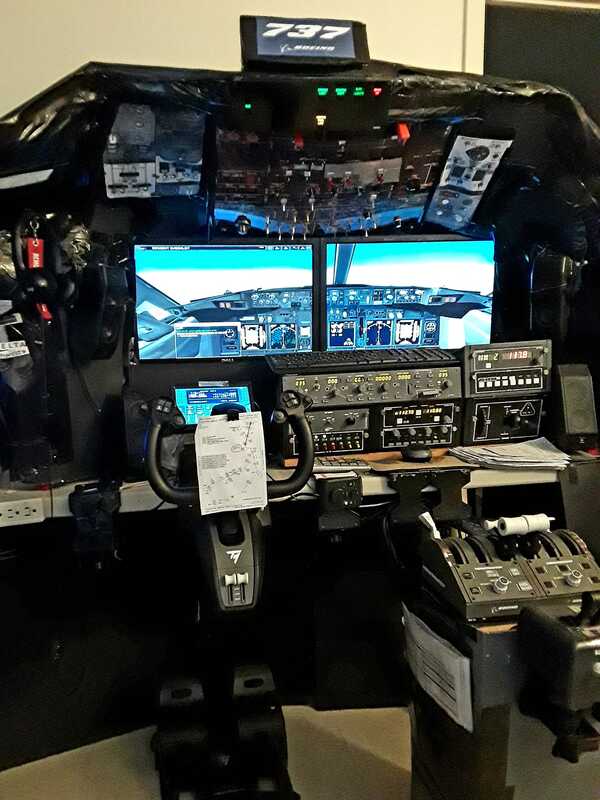 The main flight computer. Designed as a Boeing B737-800 NGX aircraft. Complete with functional overhead panel. and precision throttles. The yoke is from Thrustmaster. It is the TCA yoke available from amazon. It's uses a pendulum motion, instead of straight in/our as in the CH and Saitek yokes. The rudder pedals are also from Thrustmaster, as is the Throttle controls. I have to use two of these in order to have the Flaps and Speed Brake controls.They are available from Amazon as well.
___________________
This computer about 20 USB devices connected. The overall goal is to operate as much of the pre-flight, flight, and shutdown as possible without using the keyboard or the mouse. 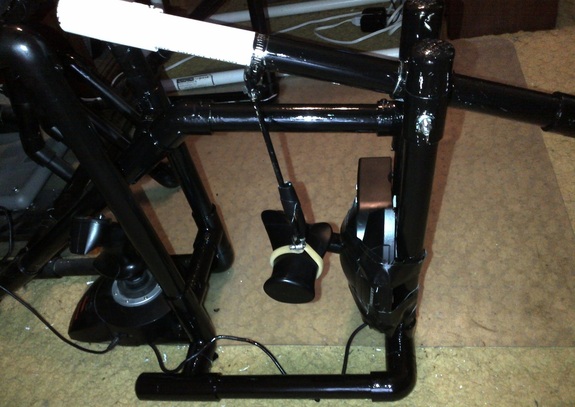 Thanks to Matt Thomas of Roger Dodger Aviation for the plans for these great project to make the sim more immersive!

Click on the picture for more information on how to get the plans for this project.

click for a You tube video of collective in action

The Cyclic & Collective for Helos, and throttle control for fixed wing flight 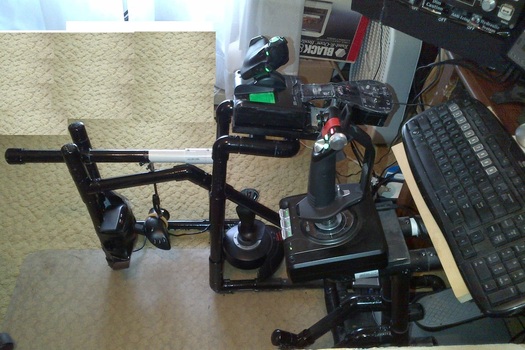 This picture shows the throttle stand as well as the Collective control and the Center mounted Cyclic control. All made with 1" PVC pipe. The Collective is the Thrustmaster T-Flight Hotas X Flight Stick that has a detachable throttle. I'm not using the joystick part of it, so it's sitting on the floor just in front of the Collective control. The Cyclic and additional throttle is a Saitek X52 pro. Mounted above the radio panel is a Saitek Engine control panel,  This enables me to control fully a single engine aircraft like the C172.
Added this 7" LCD monitor. This will enable me to put the FMS or GPS onto the display and still run FSX in full screen. This monitor once had life as a DVD player screen for a car. I got for about $80 on amazon. I run it at 800x600 which is perfect for this application.  The left picture is the FMS in the Majestic Dash8 Q400, and the right picture is the standard GPS500 with the Airbus 321.

Attached to the computer are over 20 USB devices including: GoFlight MCP Pro, GoFlight T8, P8, GF166, RP48, GF46 and LGT modules.  Also the Go Flight MESM to the left of the radio.  A Saitek Backlit Information Panel, and the Saitek Flight Informaton Panel. The GPS unit in the center above the yoke is available from Desktopaviator.com. It sets up easily and configures in a snap.
A laptop computer is connected to this main computer and reads LittleNavMap data via WideFS and flight information for AACars  There is a 5 speaker surround sound with 200 watt sub-woofer attached for great sound. Not seen in the picture is a 10.2" IPAD that displays the current flight track, approach plates, and flight data.

Closeup of the GPS unit from Desktop Aviator In  this screen I'm en route from KLAX to KMSP. Operation is straight forward. The buttons on the GPS are assigned via FSUIPC and work great. No more mouse clicks on the GPS at any phase of the flight.

Click on the image to see more information about this fantastic unit!

Overall, I use the mouse mostly to get the flight started, then everything is done with my controls _This the upper panel with the 30 Single-Pole, Single throw switches mounted.  The rotary knobs are just dummies glued to the Plexiglas. The electronics are connected to 2 USB interface boards. Thanks to the good folks at DESKTOP AVIATOR for the USB interface boards and the advice they provided in this project. You can visit them here: www.DesktopAviator.com

This is an attempt at a panoramic stitched image of the Small aircraft/ Helo flight deck. The monitor at the far left is displaying a navmap of the flight and is driven from the laptop at the far right. This laptop is used to run the navmap program, connect the flight logging software, as well and log book keeping for the flight. 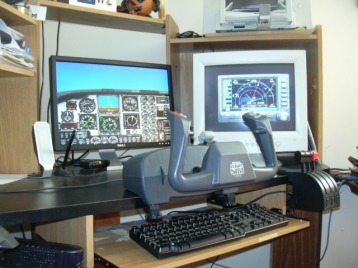 This is around the spring of 2007 when I first got started with the idea of expanding the flight deck. A CH Products yoke and pedals, with a Saitek Throttle quadrant. The main display was a 20" LCD monitor and a 19" tube monitor to the right. It was rudimentary, but it started me to where I am today! 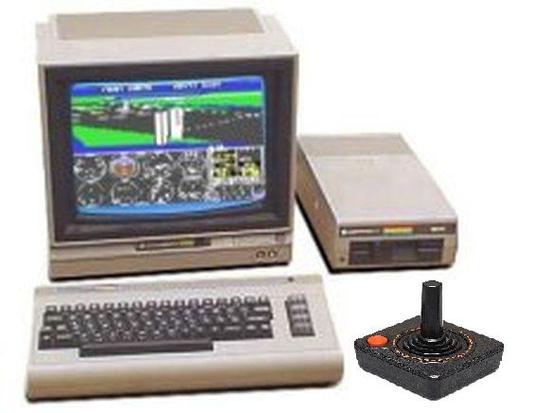 A Commodore 64 computer, color TV 13", and 5 1/4" floppy drive. This was about a $600 investment at the time.  I used the Sublogic Flight Simulator which was on a single 180K floppy disk. How things have changed. Now Flight Simulator X is on 3 DVD's and you can't even buy one for less than about $200.